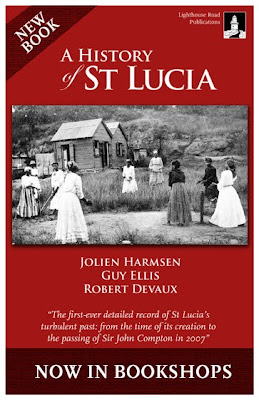 The poster speaks for itself ...
The long-awaited HISTORY OF ST LUCIA is finally here, and the phone has been ringing off the hook with congratulations pouring in for Jolien and her co-authors. The shipment cleared customs on the Friday before Christmas so didn't make it into the shops as the great stocking-filler that it would have been, but you can get your own copy at branches of Sunshine Books, Jambe de Bois restaurant at Pigeon Island and of course, The Reef in Vieux Fort. It will be available in many more locations island-wide once new year celebrations are out of the way. Retail price is EC$75.

For those of you who like that sort of thing, here's the official press release:

The first-ever comprehensive history of St Lucia is now in local bookstores. The authors hope it will become a tool for teaching students about their island’s past, as well as providing St Lucians world-wide with a detailed and factual history of their own ancestors’ lives.

“A HISTORY OF ST LUCIA” covers the period from the island’s creation to the passing in 2007 of long serving Prime Minister and “Father of the Nation”, Sir John Compton, the architect of independence.

The 400-plus page book records the island’s geological formation and subsequent Amerindian occupation, through colonization by France and England to the rise and fall of the sugar industry, the tribulations of slavery, the Brigand wars, Emancipation, the struggle for independence, dignity and respectability, the birth of trade unions and political parties, the demise of the sugar industry and the social revolution created by the advent of bananas as an economic emancipator.

The book was originally commissioned by British publisher MacMillan Caribbean, whose efforts to produce it were derailed by the 2008 world economic crisis. However, the three authors decided that such a vitally important book simply could not be abandoned at that stage and, given the tremendous amount of work already put into the project, decided to produce the book themselves.

Principal driving force behind A HISTORY OF ST LUCIA was Dutch-born Jolien Harmsen, who has lived in Vieux Fort since 1994 and holds a PhD in Social History based on research done on the island.

Another author is former Director of the St Lucia National Trust Robert Devaux, who has spent a lifetime promoting the conservation of St Lucia’s natural and cultural heritage and has several published works to his credit.

The trio of authors is rounded off by journalist Guy Ellis, whose career has run side by side with the island’s more recent past and who has written books on St Lucia as well.

An interesting aspect of the content of A HISTORY OF ST LUCIA is the choice of some very unique photographs of developments on the island over the years. For instance, the cover design by Cecile Wiltshire features an uncommon photograph of two local women’s teams playing a cricket match in Castries around 1900.

A HISTORY OF ST LUCIA is published by Lighthouse Road Publications of Vieux Fort. It is already available for sale at the island’s leading bookstores.