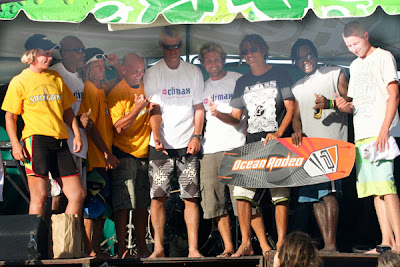 It all started with a blistering Friday night launch party … “That party was da bomb” someone said … and I couldn’t have put it better myself. With only a couple of official speeches (you can never really get away from those) and a lot of fun, laughs, dancing, delicious food and flowing drinks, it was a great way to welcome all those who had joined us for the event, as well as for setting the mood of the entire weekend.

Saturday dawned windless and overcast, and as we later found out, although it was mainly dry where we were, everywhere else outside of an approx 1-mile radius of The Reef experienced downpours for most of the day. Highly unusual for the time of year, but apart from a couple of light showers, at least we were spared the worst of it.
But nothing kills a good beach party, and since that’s what the fiesta is all about, the moderate crowds that gathered still had lots to enjoy. The local restaurants invited to participate, served up Caribbean fare from booths set up on the beach. From Jamaican Jerk, and Indo-Guyanese curried dishes to Rastafarian itals and local seafood, there was something for all palates.
Whenever the wind filled in, kiters hit the water to put on a show for the audience even though it was not consistent enough to run any of the kite events. Jeremie Tronet and Nicholas Dulac first of all invented, and then demonstrated, kite-fishing to everyone. Clearly, with one or two refinements, there’s definitely a future in it!
Tropix band were a hit on Saturday night. What a great sound … and we’ll be looking to book them again really soon (any excuse for another party). Watch this space. 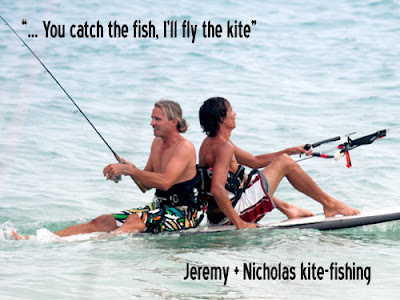 Sunday morning, 4 am... still utter darkness outside but with the definite sound of wind in the trees! By 7 am it was blowing nicely so off to The Reef to get the sound system going and to rouse the kiters. The effects of too many Strongbows the night before was hastily washed away with cups of steaming cappuccino and massive plates of bacon and eggs. By 9 am, the skippers' meeting was underway and the first kites got out on the water. A couple of free-style heats later and the beach was full of spectators from town and further afield, enjoying the action; huge jumps, handle-passes, kite loops, the Jesus-walk and other tricks, completed successfully or - not! The sight of riders soaring and/or crashing, with glittering water spraying everywhere only fuelled the excitement, especially amongst the younger members of the public. 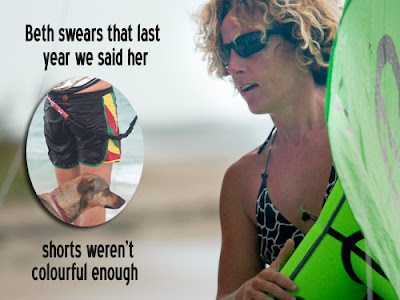 By noon, the traditional St Lucia Dash - a race in which kiters partner up with individual kids to perform a relay race on sea and beach - brought out a record number of kids from town, jumping up and down eager to be chosen to run the next race. A 16-year old girl who promised that she "could tell dem she was only 12" was turned down, but the little kid who raced his heart out, all the while holding on with one clenched fist to the waist band of ripped and hugely oversized shorts, stole everybody's heart. The orange Superman-kites handed out by Dimitri Maramenides, pro-kiter and judge for the event, were keenly received and several took to the skies immediately. More than 10 days after the event, whilst driving through Vieux Fort, we had to put the brakes on and swerve to avoid a series of little home-made kites being flown on the road along Bruceville. Inspiration starts at age four!
Sunday night got the beach back into full party mode with the 'Changes' band warming-up for 'Fourth World' reggae band who came on and blew us all away. Can't wait for next year's fiesta. Make sure you don't miss it! 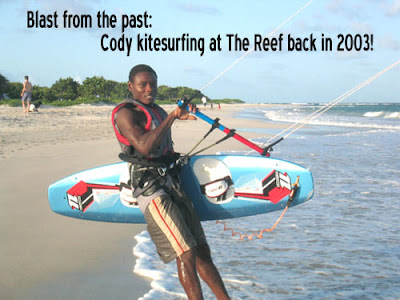