Cheap at half the price:

At only US$1.70 a glass, should we should be charging more for our seamoss punch? 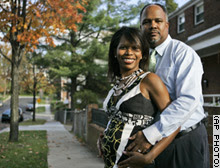 Lucinda and Kemry Hughes took a "procreation vacation." The couple — expecting their first child in April — credits the trip for their pregnancy.

MIAMI — When Lucinda Hughes heard she would have to drink sea moss elixir while vacationing in the Bahamas, she was certain it would make her sick. Sure enough, three months later, Hughes is very sick — every morning — and expecting her first baby in April.
She got pregnant after she and her husband went on a three-day Procreation Vacation at a resort on Grand Bahama Island.
It's part of a trend in which hotels around the world are luring couples who are trying to have a baby. Resorts are offering on-site sex doctors, romantic advice and exotic food and drink calculated to put lovers in the mood and hasten the pitter-patter of little feet.
Even some obstetricians are promoting the trend. Dr. Jason James of Miami said he often encourages couples trying to have a baby to sneak away for a few days, and he often sees it work.
"One of the most easy, therapeutic interventions is to recommend a vacation," James said. "I think the effect of stress on our physiology is truly underestimated."
Hughes and her husband, Kemry, went to the Westin at Our Lucaya Grand Bahama Island, where the three-night Procreation Vacation starts at $1,893. They lounged on the beach, swam in the pool, sipped pumpkin soup and enjoyed couple's massages. Hughes and her husband also were also served an age-old Caribbean fertility concoction three times a day: sea moss, the Caribbean's version of Viagra, mixed with evaporated milk, sugar and spices. (She said it tasted like an almond smoothie.) ...

Photo Shoot at The Reef 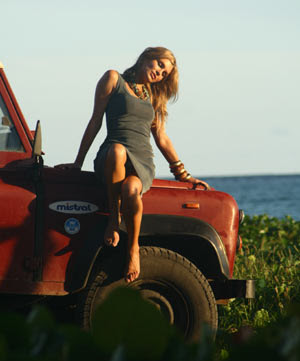 For four days, The Reef played host to the models, photographers, make-up artists, lighting crew & dressers of the "Boston Proper" catalogue. The photo shoot featured the spring collection in preparation for the next edition of the catalogue.There are more pics of the 'behind-the-scenes' action in our gallery, so the fashion-conscious amongst you can get a heads-up on what will be 'in' next season.
Posted by The Reef at 1:53 PM 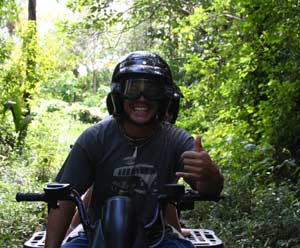 The Reef Kite + Surf team spent a day out with Kurt of ATV Paradise tours exploring Fond Estate on the east coast of St Lucia.This is an amazing ATV tour of what was once a fully-working plantation (some of the cultivation has now been cut back) and the approx. 4-hour tour covers 14 miles on existing plantation roads. The route takes you through fruit orchards, banana plantations, rain forest and mangrove to a secluded atlantic beach. 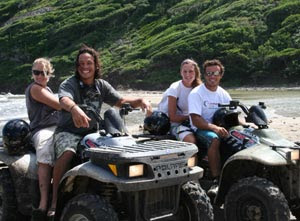 En-route Kurt treated us to a feast of fruits picked straight off the trees, and the swim in the cool forest river was the highlight of the trip. 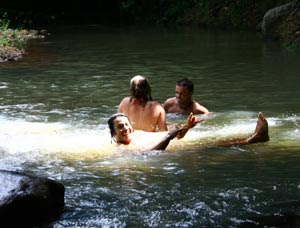 You can book the trip through the Kite + Surf centre if you'd like to experience this natural side of St Lucia. More pics in the gallery.
Posted by The Reef at 1:48 PM 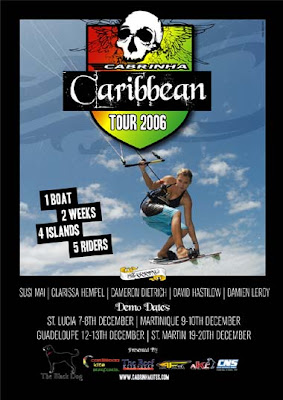 Winter is rapidly approaching, the sea temperature is dropping, if you are already starting to get the winter blues then why not plan a trip to the Caribbean and meet up with the Cabrinha guys who are sailing around the Islands with a boat packed full of the latest kit.With a choice of 4 locations to visit come and meet the guys, try the new kit, see what everyone is raving about. What better excuse is there to plan your winter vacation?
Join up with International Riders, Cameron Dietrich, Damien Leroy, Susi Mai, and National Riders, Clarissa Hempel and David Hastilow, as they show you the new kit, how to use it and give you those all important pointers on riding technique. Each location has been chosen due to the amazing conditions available so check out the contact details for each location.
Demo Dates: 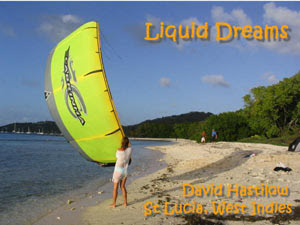 Click here to see David in action.
Posted by The Reef at 1:37 PM 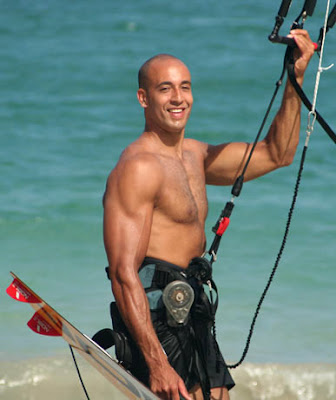 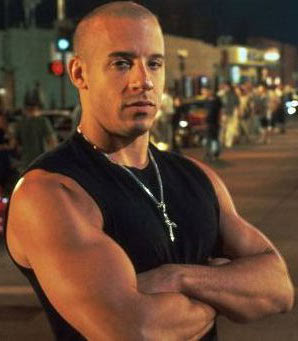 David Hastilow has joined Cabrinha as a sponsored team rider. You can read his bio on the Cabrinha website here. Dave is also a certified IKO kite instructor and teaches at The Reef Kite + Surf. He recently featured in a photo shoot for the center. 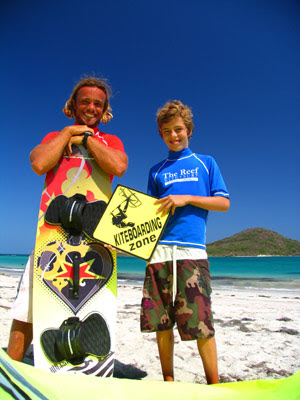 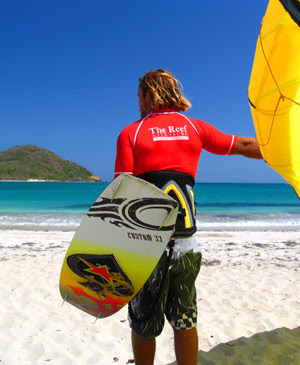 This summer Dave has also been checking out some 'secret' kite spots around the Caribbean with 'Captain Ben' who knows the islands like the back of his hand. More about the Captain, his boat and our soon-to-be-launced CARIBBEAN KITE SAFARIS & DOWNWINDERS in a later post!In the meantime, here's a sneak preview: 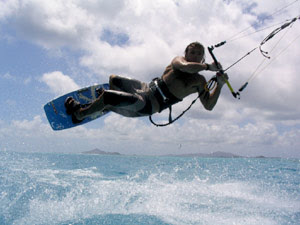 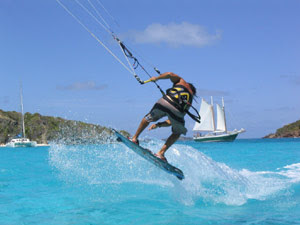 A wedding with Scottish flair

Wedding bells rang and champagne flowed for Sarah & Stuart today. We wish them all the very best in their new life together. 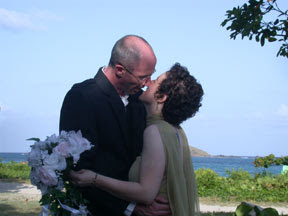 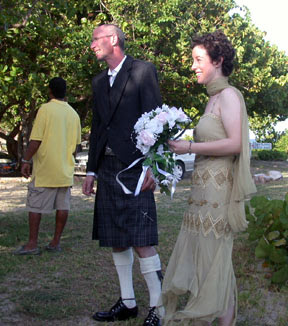 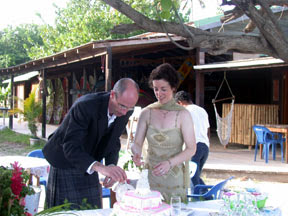 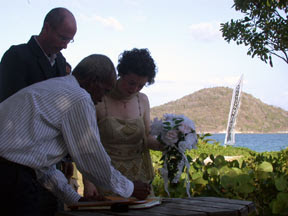 Daphnée is sponsored by VIRGIN mobile, AAER systems, EH kiteboading, SOÖRUZ wear, DAKINE, ZEAL optics and travels the world competing in PKRA World Cup events. She is also an IKO Examiner and spent time with us in St Lucia leading an instructor training course, training, and doing a photo shoot for her sponsors. 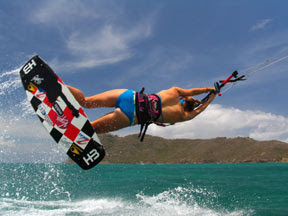 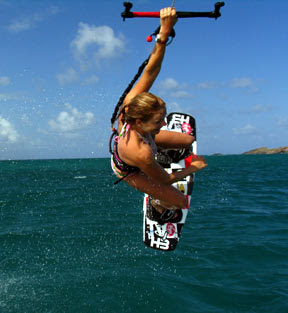 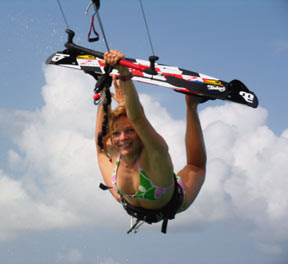 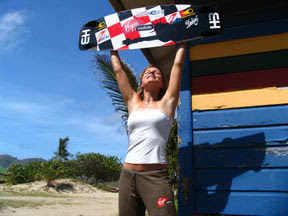 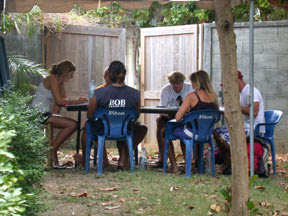 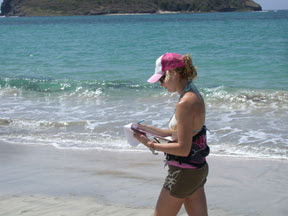 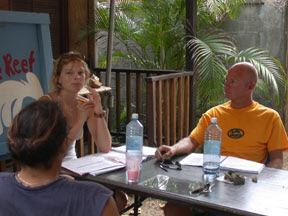 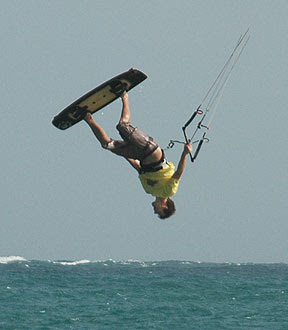 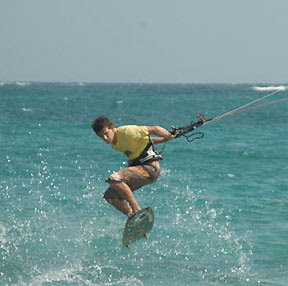 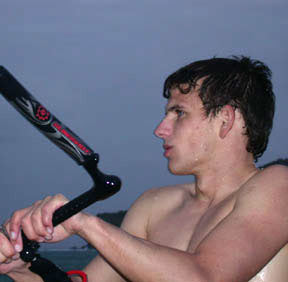 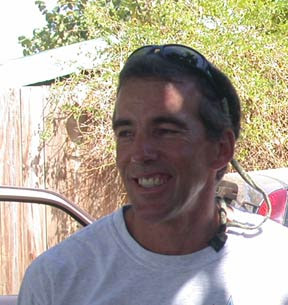 Nevin Sayre is famous for his accomplishments in windsurfing, spanning the early days of the Windsurfer One Design class to the high-performance Professional Windsurfers Association (PWA) World Tour and accumulating more than 20 national and international titles along the way. He is a five-time U.S. National Windsurfing Champion and director of marketing windsurfing, kitesurfing for BIC Sport USA. During the US Presidential elections, Nevin was 'outed' as Senator John Kerry's kitesurfing buddy! Nevin spent 2 weeks at The Reef Beach Huts with his family and friends and declared it "the perfect place for families and kids. Windsurfing ... kitesurfing .... something for all levels ... uncrowded - there are not too many spots like this left in the world." 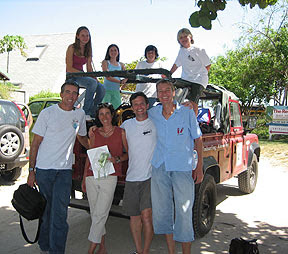 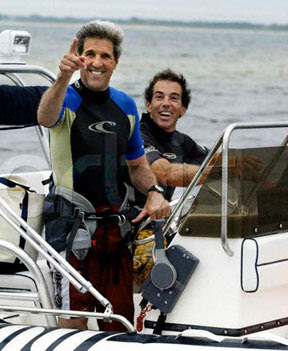